When Mark heard about the CORE Gaming Backpack Kickstarter in August 2017, he knew he’d found the perfect gift for his hard-to-shop-for son. An ardent PC gamer, the young man was always complaining about transporting his gaming gear and keeping it all organized and safe when he went to a buddy’s house for game night or to the local gaming center for a tourney.

From what Mark could glean from the Kickstarter product video, the CORE Gaming Backpack was the perfect solution: roomy enough for an 18” laptop and wireless keyboard, with all sorts of compartments and pockets designed to hold media, accessories, and chargers. The backpack’s ballistic nylon with tailored contrast stitching also gave the bag a rugged, industrial look he knew his son would like—so Mark became one of Kickstarter campaign’s early bird backers, securing a CORE Gaming Backpack for his son at a deep discount.

When the bag arrived a few months later following the Kickstarter campaign’s successful completion, his expectations were far exceeded. Unpacking it before his son could see it (and ruin the surprise), Mark knew at once he’d made the right choice. The CORE Backpack was the real deal. Sturdy, functional, and stylish, no wonder it was proving so popular with gamers and students—and no wonder it already had been named the 2017 VIP Award Winner in TWICE Magazine’s PC Accessories category.

A funny thing happened as Mark was checking out the bag. He began to envision what he could possibly store in all it’s various pockets and compartments. He began to wish he’d ordered TWO of the Core Backpacks: one for his son and one for him! 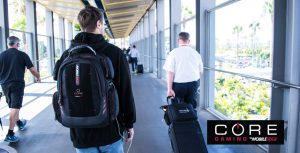 Mark wasn’t a gamer by any means, but as a mobile professional, he was always struggling with ways to conveniently and safely move his high-tech office from place to place, by automobile, plane, or good old-fashioned leg power. To him, the CORE Backpack represented the perfect solution for his needs as well: big enough to organize and store all his gear when he had to be on the road locally, yet small enough to fit under the “seat in front of him” or in the overhead compartment when he needed to jet off to a client’s place of business for a few days.

So when the CORE Backpack became available for retail order in the fall, Mark ordered one of his own!

Eagerly awaiting its arrival, he could only watch with envy as his son began using his bag. A funny thing happened there, too. As expected, his son loved the bag for game nights, but he also started to use it to transport his personal tech to and from work, or even to a friend’s house for non-gaming related activities. His son was finding that having one place to store and organize his gear was so convenient, he rarely took the gear out other than when he wanted to use it. The CORE Backpack was not only the perfect transport solution, it was also the perfect place to park his gear when not in use!

A PLACE AND A POCKET FOR EVERYTHING 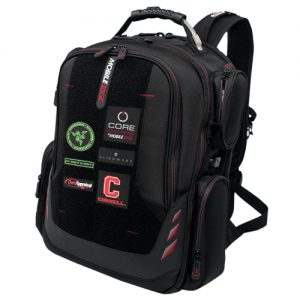 Mark’s had his CORE Backpack for three months now. Already it’s made two coast-to-coast trips with him, numerous regional flights, and thousands of miles by car. It looks as fresh as the day he got it, not to mention his gear.

“It’s got a place and a pocket for everything,” he’s fond of telling colleagues (and even a few complete strangers) who ask him about the bag. He’s even got a few compliments from TSA agents on the backpack’s checkpoint-friendly design.

Best yet, his back is feeling better than it has in years. He’s no longer laboring with his overstuffed briefcase, slung over one shoulder while he trails his Samsonite spinner behind with the other hand. Most times, with the CORE Backpack’s trolley strap, it’s sitting comfortably atop his suitcase. Other times, when he’s just out and about to a client’s office for the day, with padded air-mesh shoulder straps, he can wear the bag on his back in comfort as intended.

A backpack for gamers? Sure—Mark’s son is living proof of that—but the CORE Gaming Backpack is so much more. It’s equally appealing to road warriors and other busy professionals looking for a highly functional, safe, and stylish way to transport all their mobile office tech.

Check out the CORE Gaming Backpack and other CORE accessories at Mobile Edge.