Home ›
While the debate continues as to why attendance and viewership for National Football League and Major League Baseball have been dropping the past few years, one thing for sure is that the popularity of eSports is exploding. In its 2018 Global eSports Market Report, industry research group Newzoo reports that:

The Rise of eSports

According to the global public relations website, the Holmes Report, the eSports industry is growing exponentially, with media rights, advertising, merchandise sales, sponsorship opportunities, and revenue streams all increasing by double digits each year—and they see no end in sight. In a series of articles posted on its website, Foley.com, a global law firm that focuses on
Read More
Growing up, one thing we knew for sure was that all work and no play had a way of making Mom and Dad cranky . . . and who could blame them? Unlike us kids, who could look forward to summer breaks because it meant long days ahead for playing and hanging out with friends (and no homework), our parents pretty much had to work year-round, with only weekends and an occasional break for holidays or family vacations to look forward to. Even then, it usually took a few days for them to “leave the work behind”—if they could at all—so they could unwind and enjoy the time off. Summer was always prime time for family vacations. We kids were off and our parents could usually get some time off, too, which meant it was time to escape for some family fun. Summer is still the favorite time of the year for families
Read More
Alex was starting a new job on Monday. While the new job was in the same industry Alex had been working in for the last 20-plus years, the stage was bigger than he was used to—national vs. regional—and the stakes much higher. The people and places he was going to encounter were going to be different too, so making a good first impression was critical to his getting off on the right foot. Look Good, Travel Smart For the last few weeks, Alex had spent a good deal of time shopping for a new work wardrobe so he could dress and look the part that his new employers and his new clients expected. For starters, he’d gotten a couple of tailored suits, shirts, dress shoes, and pants for those days when clients and investors were in the office and he’d need to look his tip-top best for meetings and networking
Read More
If you haven’t already scored your passes for this week’s “E3” event in Los Angeles, you may have a tough time gaining access to this premier trade show for computer and video games and related products. The show is happening, right now, June 12-14, at the Los Angeles Convention Center—and E3 Gamer and Business passes are sold out. While on-site registration and passes for those who work in the industry may be available, it’s only for as long as the Convention Center hasn’t reached capacity and on-site registration remains open. 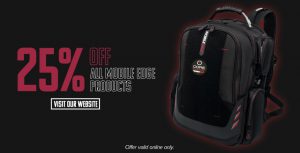 Take 25% Off With Mobile Edge Even if you can’t make it to E3, you can still be part of the experience. For one week only, Mobile Edge is offering 25% off all Mobile Edge products purchased through our online store.
Read More
Say thanks to your mobile Dad this Father’s Day with a gift from Mobile Edge. We make it easy for you to show your appreciation with the following cases, backpacks, briefcases, and messenger bags specially selected for Dads “on-the-go.” Each comes with a lifetime warranty and offers a mobility solution and style that’s sure to satisfy even the most discerning of Dads. 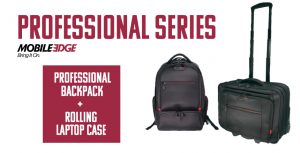 Mobile Edge’s Professional Rolling Laptop Case, a 2016 TWICE VIP Award Winner, and the matching Professional Backpack, which fits securely atop the rolling case using a trolley strap, are perfect for business travelers and busy Dads. Stylish, durable, and highly functional, the laptop case features an adjustable compartment to fit tablets, notebooks, and laptops from 13 to 17 inches, while the backpack holds laptops and other devices 13 to
Read More