Home ›
These days, everyone is more mobile than ever. We’re driving more and flying more, seemingly on-the-go 24x7 either for play or for work. Professionals are not immune to this phenomenon. In fact, many professionals—whether they are executives, business owners, solopreneurs, or sales and account reps—spend more time on the road or in the air than they do in their brick and mortar offices. 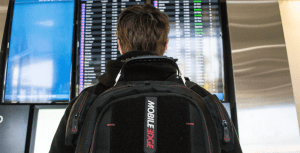 Let’s then take a look at those career signposts that indicate you just might be a mobile professional:
Read More
American high schools in at least 15 states will be rolling out varsity eSports programs in 2018 thanks to a program spearheaded by PlayVS, a startup building online and offline infrastructure for high school eSports. The inaugural season begins in October 2018 with competition expected in three genres: multiplayer online battle arena (MOBA) games, fighting games, and sports games.

Varsity-level eSports programs have been active at the college level for a number of years, growing from just one program in 2014 at Robert Morris University in Illinois to more than 60 colleges and universities that currently offer “official” eSports programs. Currently, Variety.com estimates that “nearly 200 colleges in the U.S. and Canada are actively recruiting and offering scholarships to (eSports) players.” Such offerings at both the college and high school levels engage a wide range of students in organized after-school activities, recognizes them through competitions
Read More
Whether you’re staying home or taking a few days off around the 4th of July this year, Mobile Edge is making it easier to take your mobile office, gaming gear, or other computer and electronics with you as we wish America, “Happy Birthday!” 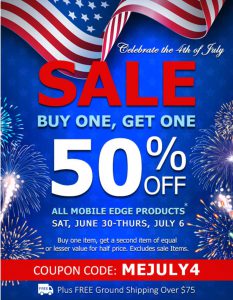 Celebrate With Buy One, Get One 50% Off To celebrate, Mobile Edge is giving a special “buy one item, get one at 50% off” sale on ALL Mobile Edge products purchased through its online store from Saturday, June 30 to Thursday, July 5 (not July 6, as stated on the graphic). You may be off for the 4th, but the Mobile Edge online store is always open, 24x7, 365 days a year. Just use the promo code MEJULY4 at checkout to buy one item and get a second item of equal or lesser value for half price
Read More